Nibweb at The Bookseller’s Children’s conference

Nibweb members were able to make an impact at ‘The Bookseller’s Children’s conference, held on 24 September at County Hall in London (former home of the GLC).

Nonfiction was at the fore. Lionel Bender and Jenny Vaughan had been asked to help produce a nonfiction strand to the event but, as it turned out, there was far more emphasis on nonfiction than we could have dreamed. The tone was set from the start by keynote speaker Hanna Otero, publisher for Lonely Planet Kids, on ‘Inspiring kids about the world, around the world’.

Our own Lionel Bender spoke enthusiastically and informatively on the market in the US, where nonfiction more than holds its own: the range of formats, styles and subjects illustrates just how exciting nonfiction can be when given the right support. He mentioned that the demands of a system called ‘common core’, used in many states, has meant that, for children at primary level, 50 per cent of their reading is supposed to be nonfiction, rising to 75 per cent as they move up the education system. The idea, he said, was ‘to prepare children for adult life’ – rather than for exams, which is how he saw the UK system. With such a concentration on nonfiction, there is a chance for experimentation and originality – narrative nonfiction, graphic material, activity books and so on. And libraries, he said, make space for these books. In the US, he emphasised, nonfiction is ’treated with respect’: he compared the 11 per cent proportion of nonfiction in the UK children’s market with the massive 25 per cent in the US. There are lessons to be learned, he said, and there is potential.

Fellow Nibweb member, writer Stewart Ross made an impassioned plea to publishers to make more of their nonfiction authors by giving them better recognition and encouraging them to generate ideas, publicity and, of course, sales.

One especially interesting panel session was entitled ‘Post-Rebel Girls, what is the future of children’s non-fiction?’ Chaired by Rachel Williams of Frances Lincoln Children’s Books and co-founder of Wide-Eyed Editions, it included Annie Everall of Authors Aloud UK, Alison Tarrant; Chief Executive of the School Library Association; Sarah Larter, children’s publishing director, DK; and Liza Miller, senior editor, Hachette Children’s Group. Discussion ranged widely, but centred on the fact that sales of nonfiction have been rising, and that there is a move away from the idea that the genre has to be dull.

The arrival of feminist books, they agreed, has coincided with other ‘special interest’ titles (about disability, for example) and the possibility of titles based on real-life mysteries and other ‘true life stories’. Nonfiction, they emphasised, is a lot more than the internet, has a lot to offer young readers and, in many cases, a good nonfiction book can tell a ‘story’, which will be read over and over again.

The less encouraging news came during a panel on ‘Competing for copyright, licences and rights’ at which Owen Atkinson, CEO of ALCS revealed how a survey carried out by his organisation had uncovered depressing statistics about the drop in authors’ incomes over the years. (For more about ALCS, see this page.)

Despite this, the day was an overwhelmingly positive event for nonfiction and those of us who attended left feeling that a bright future can lie ahead, and we can play a part in it.

The pictures show the Nibweb table at the conference, where members were able to display publications, flyers about themselves and their work, business cards and so on. 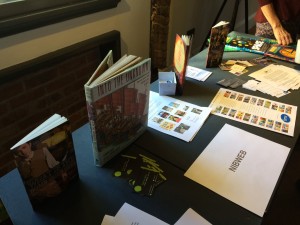 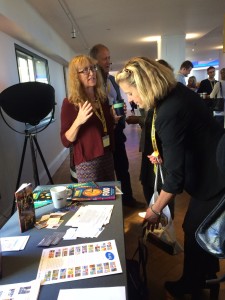