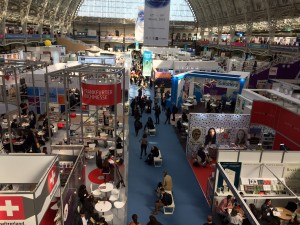 Several Nibwebbers went, but on different days, so there was no chance for meeting up, However, all noticed that the growth in children’s non-fiction seemed to be continuing, though enthusiasm was  sometimes  rather qualified. Here’s what they had to say:

‘… my impression was that there is a great deal more CNF, especially from smaller publishers. Good.
Less good was (1) most of it focussed on the same handful of subjects – dinosaurs, environment, Kings and Queens, etc; and (2) a tendency to provide gimmicky gloss rather than solid content – do children really need to be entertained by snigger and giggle 24/7? Surely they’re not that dumb? (Actually, I know they’re not. Most do not like being talked down to.)
…  (on the French exhibits) [they] have always been more serious minded with their CNF – see all those carousels of the stuff in motorway service stations.’ Stewart Ross

‘… there seems to be a much greater array of CNF than in the past, and a move away from series … I think that’s encouraging … not sure about cover prices, though – how much cnf is produced for parents of modest means to buy as anything other than presents? Will schools be able to afford such books? Thought there was some interesting stuff from France …’ Jenny Vaughan

‘I thought the mood was more upbeat than it had been for years. Money is going into new projects (but not passed on to us, as they conceded), interest in new ideas … I still have concerns about trends in design and artwork though and, as Stewart says, above, there is too much prioritising of gimmickry over the basics. I like artwork which  augments the information provided in the text. Picture book styles for cnf may be attractive or retro or in vogue, but they must show how things work and other fundamentals. (Very pleased to see a roving NUJ presence there, I must say.)
‘Not the place for a bad back though! On every LBF feedback I’ve ever done, I have called for more chairs and tables for the likes of us, as most stands are filled up with rights people.You can spend half the appointment time searching for somewhere to talk, and end up sitting on the floor.’ Philip Steele

‘Books must work very hard to differentiate themselves from online content. That’s probably why cnf has become much more “arty”. Some of that art is very expensive and has swallowed up the budget, and has led to the text being written in-house by people inexperienced in providing information. Some of it looks muddy and dark, in my eyes, especially in the nature genre. But some of it looks glorious and will inspire children.
‘I applaud the way that art-based publishers have woken up to the need for non-fiction at last. The trick is to do is as well as we possibly can to appeal to today’s taste. …
‘Agents say there’s no demand from publishers for novel-sized paperback non-fiction, but I believe there will be when the gift book market is saturated. It’s already saturated with some subjects … but there are also some very good books out there and a great hunger for good non-fiction. We should be very happy about that.’ Moira Butterfield